We are extremely grateful to Professor Kagan for delivering the well-received 2016 Annual Uehiro Lectures in Practical Ethics.

SHELLY KAGAN is Clark Professor of Philosophy at Yale. After receiving his B.A. from Wesleyan University in 1976, and his Ph.D. from Princeton University in 1982, he taught at the University of Pittsburgh and the University of Illinois at Chicago before coming to Yale in 1995. He is the author of the textbook Normative Ethics, which systematically reviews alternative positions concerning the basic rules of morality and their possible foundations, and The Limits of Morality, which challenges two of the most widely shared beliefs about the requirements of morality. Other books include Death and The Geometry of Desert. 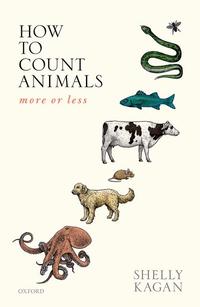 How to Count Animals, more or less

Most people agree that animals count morally, but how exactly should we take animals into account? A prominent stance in contemporary ethical discussions is that animals have the same moral status that people do, and so in moral deliberation the similar interests of animals and people should be given the very same consideration. In How to Count Animals, more or less, Shelly Kagan sets out and defends a hierarchical approach in which people count more than animals do and some animals count more than others. For the most part, moral theories have not been developed in such a way as to take account of differences in status. By arguing for a hierarchical account of morality - and exploring what status sensitive principles might look like - Kagan reveals just how much work needs to be done to arrive at an adequate view of our duties toward animals, and of morality more generally.

Link to the Uehiro Series in Practical Ethics on OUP Website.

How to Count Animals, More or Less

Much contemporary writing on animal ethics is "egalitarian" in the sense that otherwise similar harms (or goods) for people and nonhuman animals are thought to count equally.  In this sense, animals and people can be said to have the same moral status ("pain is pain").  In these lectures, however, I will explore an alternative, hierarchical approach, according to which animals differ from people, and from one another, in terms of the moral significance of their lives, their goods and bads, and the various rights that they possess.  I'll sketch what a hierarchical approach might look like in a consequentialist framework, and--more complicatedly--in a deontological one, closing with some thoughts about the position of animals in foundational moral theories.