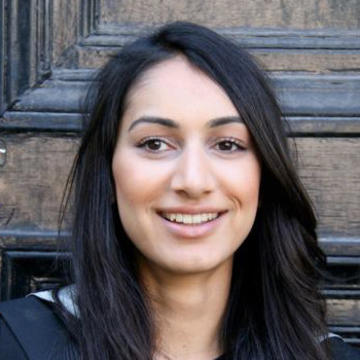 We are delighted to announce that recent Uehiro Centre graduate, Gulzaar Barn, has been selected by BBC Radio 3 and the Arts and Humanities Research Council (AHRC) to be one of the New Generation Thinkers 2018.

The New Generation Thinkers were selected from hundreds of applications from academics at the start of their careers. The final ten were chosen for their ability to demonstrate a passion to communicate their scholarship to a wider audience. After a four-month selection process, involving a series of day-long workshops at the BBC in Salford and London, the final ten were chosen by a panel consisting of AHRC and BBC Radio 3 and BBC Arts producers. They will spend a year being mentored by producers from Radio 3’s Free Thinking programme, and their research will be made into radio and television programmes for BBC Radio 3, BBC Four, and other outlets.

They will be introduced publicly at a free event as part of BBC Radio 3’s Free Thinking Festival at Sage Gateshead, which will be recorded on 10th March, with further programmes to be aired on BBC 3 throughout 2018.

Gulzaar Barn, now a lecturer at the University of Birmingham, said, “I am delighted to have been chosen as one of the New Generation Thinkers. I look forward to being able to explore the issues behind recent headlines concerning the buying and selling of bodily labour. Intuitively, many of us seem to have an aversion to undertaking this kind of labour, and feel particular concern for those that do. I'm interested in exploring what might be motivating this concern, and how this might make the body out of bounds.”

Julian Savulescu said, “This is an outstanding achievement. Gulzaar’s work is of great importance to national and international debate. Bodily labour such as donating gametes, surrogacy, clinical research trial participation, and even live organ donation are growing markets worldwide. Gulzaar’s work has enormous implications for how we think about whether or how these should be legalised and regulated in a globalised market for these services.”

We would like to thank the Wellcome Trust for supporting Gulzaar Barn’s DPhil and the Uehiro Foundation on Ethics and Education for supporting the Oxford Uehiro Centre for Practical Ethics.